Who Are The Best Players on TOUR Who Don’t Own A Major Title? 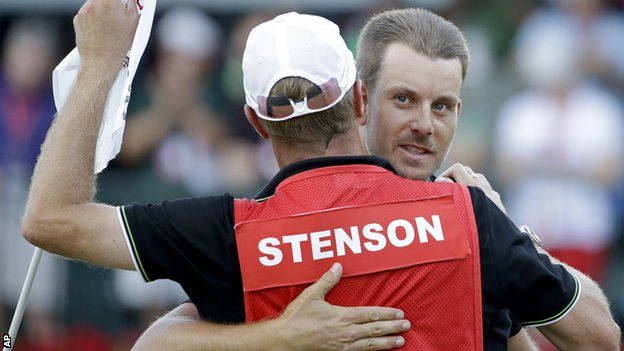 With the 2014 Masters Tournament getting underway next week, which kicks off the major season, it’s never too early to start talking about who are the best players in the game who have yet to win a major championship. The list changes every year because you have to eliminate some players who are getting long in the tooth, and really are no threat to win the big one.

The big name that was on the yearly list was Colin Montgomerie. But now that he has been put out to pasture on the Champions Tour, he may be a threat to win a senior major title, but for all practical purposes is done competing in the majors on the regular tour.

The two big names that come to mind for the 2014 season who ready to contend, and win their first major in 2014 are Henrik Stenson, and Matt Kuchar. Stenson is a no-brainer after what he did in 2013 to be the best player in the world today without a major title. I have Kuch firmly tucked into second place on the list.

Henrik Stenson looked out of sorts after returning from the off-season where his life had to be a whirl-wind of sponsor and talk show stops. He even said in an interview that he really didn’t have much time to practice, or rest after winning the FedExCup and the Race To Dubai.

I’m sure his bank account is happy, but you have to know that winning a major is a goal he needs to satisfy pretty soon. At age 37, we have seen what age can do to a body, and a golf swing. Just ask Tiger Woods, or Phil Mickelson.

I liked what I saw from the world’s number three player at Bay Hill. He had been struggling with his driver all spring, and seemed to be hitting the ball much better. He had a week off to bond  with his putter, and we should see a much improved  Henrik Stenson this week in Houston. He finished tied with Billy Horschel for second place here last year and a good finish would do a lot to boost his confidence as they head to Augusta next week.

Matt Kuchar is also on the verge, and needs to take the next step this year. He won the THE PLAYERS Championship a couple of years ago, and certainly has the game to win a major this year. I don’t think he, or Stenson will win in Augusta, but I wouldn’t count either one of them out for the three remaining tournaments.

I wouldn’t read too much into what Matt Kuchar did on Sunday at TPC San Antonio. He was paired with a human rain-delay, and the pressure from tournament officials to hurry took him out of his game. I really felt like he would make a Sunday run, and with his pedigree, maybe pull out a win, but it didn’t happen.

Although Matt Kuchar and his driving accuracy numbers won’t have an advantage at Augusta (there’s no rough there). it will come into play at Pinehurst. With that being said, I think Matt’s best chance this year will come later.

If I was forced to make this a list of five, I would have to include, Lee Westwood, Steve Stricker, and probably Dustin Johnson. I feel like Westwood and Stricker have missed the boat at this point, and Dustin has missed the opportunities.

Dustin Johnson has the game, and youth to still get some majors. His maturity and short game have improved, and all he needs to do now is get himself in contention. Lee Westwood on the other hand is probably done looking for that first major.

It was a valiant effort to move his family to Florida so he could practice more, but I think it’s too little too late at this point. Unfortunately, like a lot of other players from his time, he was derailed by the lack of a short game, and Tiger Woods!

Les is a retired engineer who has a passion for sports. He started with FanSided as a Staff Writer at Stock Car Spin and Beyond The Flag. He is the Editor of Pro Golf Now, and continues to contribute at Beyond The Flag, Riggo’s Rag,Fansided Radio, and FanSided.com. He is an active member of the Google+ golf community and is also a regular on the Friday Foursome and Back 9 Google+ Hangouts. You can find Les on Twitter and Facebook.

Les is a retired engineer who has a passion for sports. He started with FanSided as a Staff Writer at Stock Car Spin and Beyond The Flag. He is the Editor of Pro Golf Now, and continues to contribute at Beyond The Flag, Riggo’s Rag,Fansided Radio, and FanSided.com. He is an active member of the Google+ golf community and is also a regular on the Friday Foursome and Back 9 Google+ Hangouts. You can find Les on Twitter and Facebook. View all posts by Les Bailey

Don't see what your looking for?
Have questions?

Please call as we offer more golf courses than can be found online and are happy to answer any questions you may have.