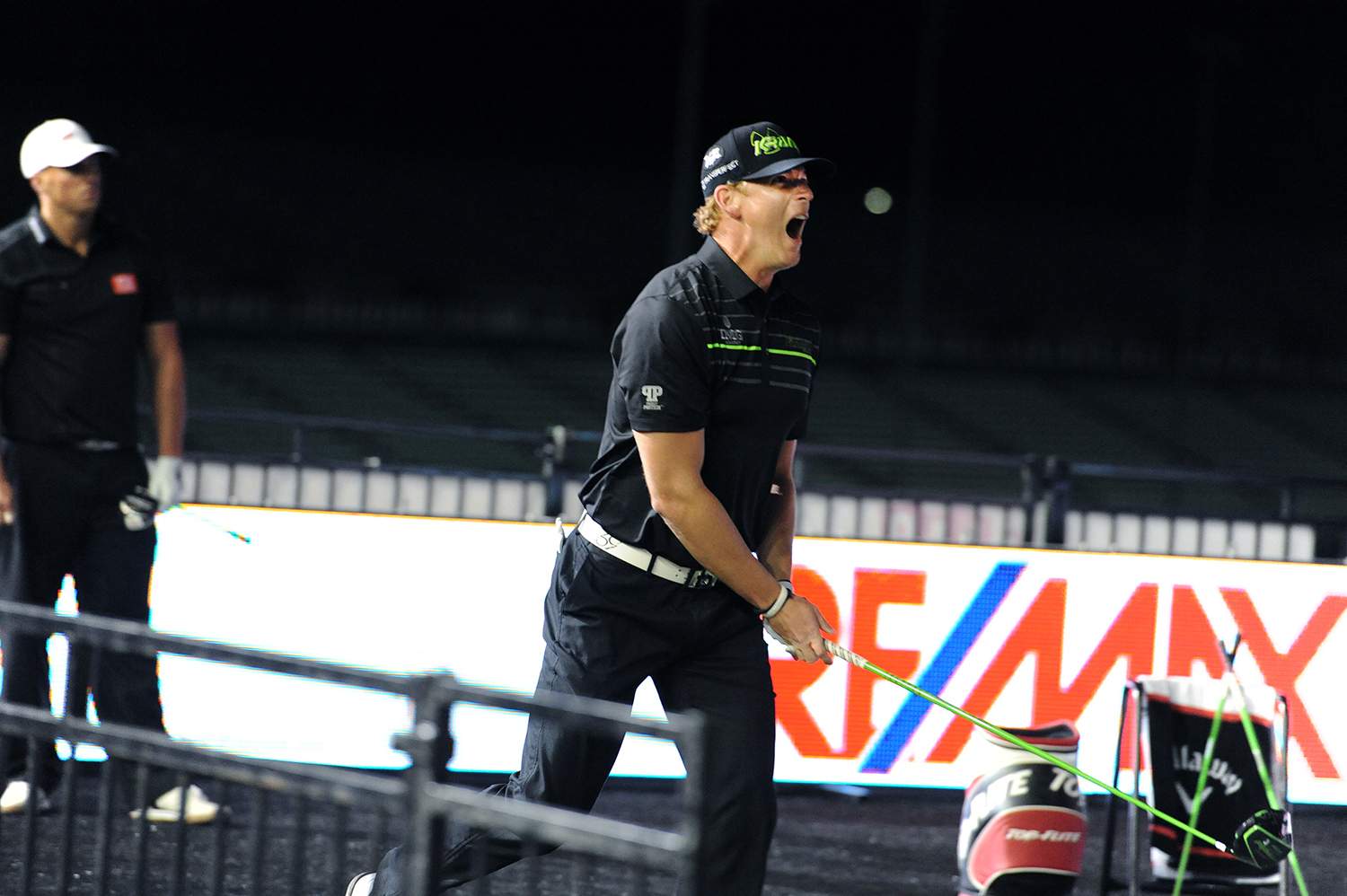 I don’t hit the ball very far off the tee. I never have. But as time goes by, technology in clubs and golf balls, and an obsession with overall physical fitness, guys are hitting the ball further and further. I just saw a stat today that Keegan Bradley averaged 301.1 yards in 2014. I hit a drive 300 yards once… It was downhill downwind and I got a good bounce. But it was 300 yards! Anyway, there are some hardcore guys out there that hit the ball even further than that. These guys aren’t on TOUR, but every year they come together for the World Long Drive Championship.

This year Tim Burke won his second title in three years on Wednesday night, defeating Jeremy Easterly with a 394-yard drive in the final match to take the title. 394… I’ve played par 4s shorter than that!

Tim is only 29 and he won in 2013, which played out on a unique stage at the Las Vegas Motor Speedway. His final-round drive of 427 yards is the longest ever recorded in the last stage of a World Long Drive Championship. Right?! 427 yards… That is crazy long!

A few years ago I played 18 holes with a guy that works at the Legacy Golf Club in Phoenix, Arizona. He competes in long drive competitions, and I remember one hole I hit a drive as good and as far as I could hit it. He flew his drive a good 100 yards past mine. Funny story… I made birdie. He made bogey. I digress.

Burke commented on his win, saying, “I got dedicated this year; got a little better golf swing, learned how to handle the pressure a little better and everything came together.” 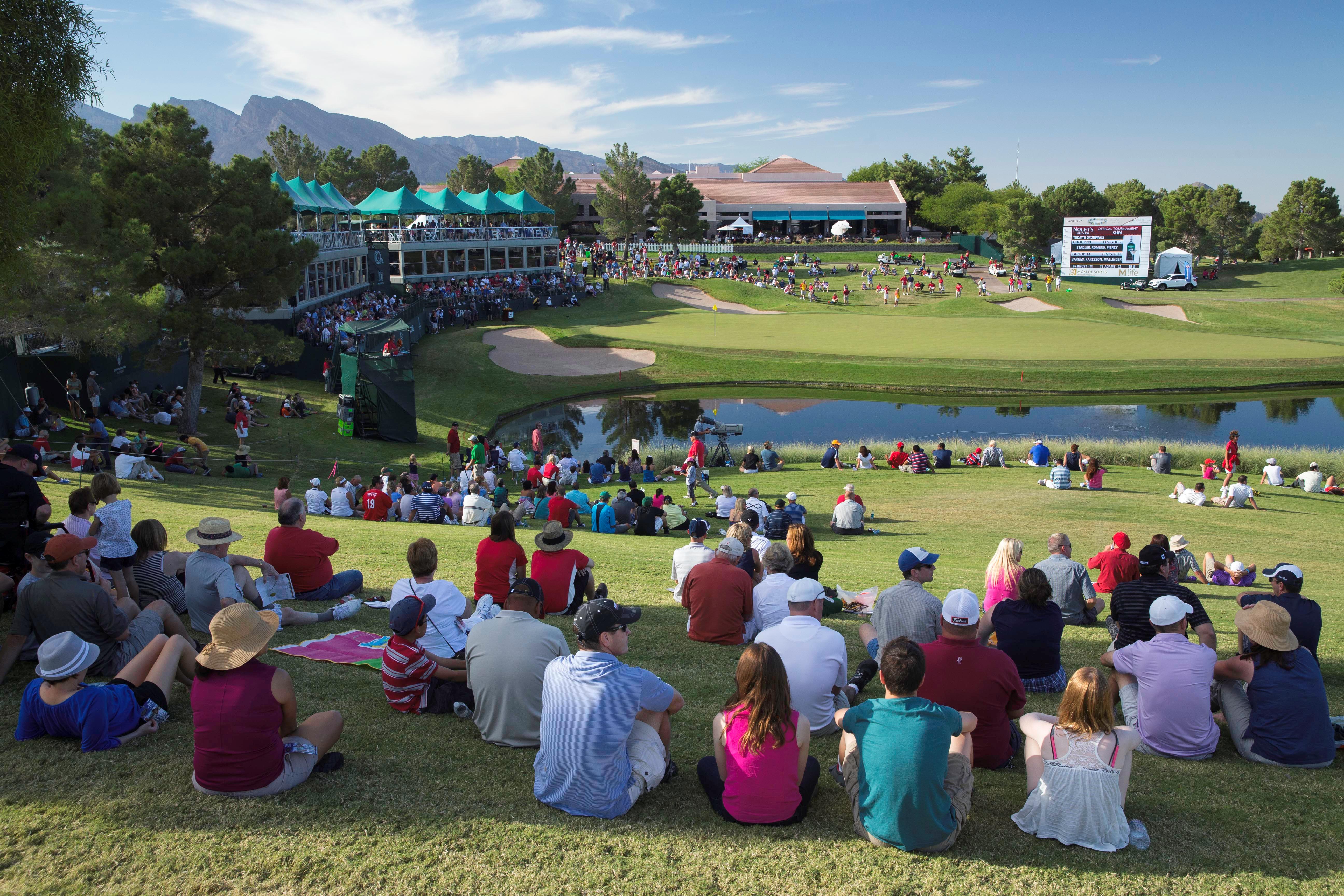 The Shiners Hospitals for Children Open is this week at TPC Summerlin in fabulous Las Vegas, Nevada. It’s still hard to believe that the 2015-2016 PGA TOUR season is upon us, but some big names are teeing up this week in Sin City. Rickie Fowler will be in the field this week. He has promised a “more active schedule” this year. Time management is a major concern for TOUR players, and Fowler recently commented on that, saying,”Time management is a big part of playing well out here, when to play, when not to play, and how much off the course to do.” Fowler will start his year this week, and looking at the field, he has a pretty good chance to win.

There aren’t a lot of big names playing this week. Other notables include Martin Laird, Jonas Blixt, Chad Campbell, Graham DeLaet, Davis Love III, Brandt Snedeker and Hunter Mahan. You know… The more I look at the guys playing this week, the more excited I get. Of course, last week, the Frys.com Open ended in a playoff with two guys that normally don’t produce a lot of headlines. It was fun seeing Emiliano Grillo win… It was his first TOUR event and he punched a ticket to play in the Masters Tournament. To keep things interesting, both Emiliano and Kevin Na are in the field this week.

The Shriners Hospitals for Children Open has been a Las Vegas tradition since Fuzzy Zoeller won the event in 1983. I was born in 1983… Think about that for a second. The mission to support world class pediatric care offer countless opportunities for fans and players alike to start their own traditions with us.

I will be watching this weekend and the tournament will be live on NBC Sports all weekend long. If I wasn’t playing golf this weekend, I might skip over to Vegas for some PGA TOUR action. Tiger isn’t in the field, but it promises to be an exciting weekend of professional golf.

NBC Sports Group announced today that David Feherty will make NBCUniversal his exclusive media home, which will include adding Feherty to NBC’s golf tournament coverage team, including the Olympics; an extension of his award-winning series Feherty on Golf Channel; and a slate of new ventures highlighted by a Universal Television development deal.

Described as “a cross between Oprah Winfrey and Johnny Carson” by The New York Times, Feherty has made a name for himself not only through his self-titled Golf Channel talk show, but as one of the most irrepressible personalities calling golf over the past two decades. A native of Northern Ireland and a former professional golfer who scored 10 worldwide victories and a spot on the 1991 European Ryder Cup Team, Feherty is now a proud American citizen who has risen above a history of alcoholism and addiction to become an Emmy-nominated television host, New York Times best-selling author and comedic relief for thousands of men and women in uniform.

“I’m really looking forward to this next step in my career‎, but I’ll miss a lot of people who have had my back for nearly 20 years. And to be honest, I’m on the verge of soiling myself,” said David Feherty, NBC Sports golf analyst and host. “However, I am looking forward to new challenges and opportunities at NBC and Golf Channel. I haven’t yet heard the over-under on me getting fired, but hey, I beat the odds the last time.”

“David is a true talent who connects with people from all walks of life because of his ability to transition from hilarious to heartfelt so smoothly,” said Mike McCarley, president of Golf Channel. “Now we will be able to showcase his unique voice across a wide array of NBCUniversal assets, including from the biggest stages in global sports and entertainment.”

In his new role with NBC Sports, Feherty will be a walking and tower analyst on NBC and Golf Channel, primarily for their slate of marquee PGA TOUR events, including the “Florida Swing,” THE PLAYERS Championship, and FedExCup playoffs. Additionally, Feherty will be a fixture on NBC Sports’ coverage of the Olympic Games, Ryder Cup and Presidents Cup, as well as select PGA of America and European Tour events. Feherty also will call golf’s original championship, once NBC Sports becomes the home of The Open Championship in 2017.

“I have admired David’s unique perspective on golf telecasts for years,” said Tommy Roy, 30-time Emmy Award winning producer, NBC Sports. “His addition to the Golf Channel and NBC team will further enhance our coverage of this game we love, and also help David rise to new levels professionally with the exclusive opportunity to call golf at the Olympics, Ryder Cup and The Open Championship.”

In addition to calling golf at a majority of NBC’s 24 golf events on broadcast television in 2016, Feherty’s addition to the NBCUniversal family also includes:

It was only a matter of time, but Adam Scott has decided to make the switch this week for the Presidents Cup. Adam has had some time to work on his game having been eliminated from the FedExCup after The Barclays, so there is no excuse for him not to come out guns a’ blazin’.

“It was a good time to make the change and I spent some time working on it, a similar amount of time actually when I went to the long putter,” said Scott. “It’s kind of refreshing to make a forced change because my putting stats are certainly unimpressive this year.”

Scott ranked 158th this past season in strokes gained putting. But he thinks he he can get better. “I’m very confident I can make myself one of the best putters on TOUR.” Only time will tell, but I am glad to see the broomstick go.

Swing speeds in excess of 140 mph and drives that eclipse 400 yards will be par for the course, as Golf Channel once again will celebrate “Long Drive Month” in October. The month of programming will be highlighted by back-to-back nights of the World Long Drive Championship, Tuesday-Wednesday, October 20-21, live and under the lights from WinStar World Casino and Resort. Throughout the month, Golf Channel also will integrate the long drive theme into its instruction, news and digital programming to celebrate the long ball.

The cornerstone of Long Drive Month will center around the World Long Drive Championship, with Golf Channel airing live coverage across consecutive nights to ultimately crown the longest golfer in the world. The 64-man match play bracket – being implemented this year for the first time – will play out during Golf Channel’s coverage featuring the round of 16 being narrowed down to eight competitors on Tuesday, Oct. 20, and the remaining eight dueling for the first place prize and $250,000 purse on Wednesday, Oct. 21. Golf Channel’s expanded coverage of the Championship also will include news and results of the qualifying rounds, Oct. 14-19, leading up to live coverage on Oct. 20-21. New to 2015, competitors will have 2 minutes, 45 seconds to hit their drives in each round, and the player who is trailing in the match will have an opportunity to hit one final ball past their opponent’s to try and advance to the next round in the bracket.

“Hitting it long is arguably one of the most fascinating shots in golf, and these athletes who spend 365 days a year training to compete at the highest level each have fascinating stories themselves,” said Tom Knapp, senior vice presidents of programming, Golf Channel. “Our viewers can’t get enough live golf, and events like these put a Championship belt on the line in primetime, under the lights in a spectacular pressure-filled setting.”